Architecture is the art and science of designing buildings and structures like gates, bridges, and other things that are built. Sometimes, the areas surrounding the building, such as paths and gardens, are included in the design too.

People who design buildings are architects. They may need skills in many fields, for example, mathematics, science, art, technology, social sciences, politics, history, and philosophy.

The Colosseum, Rome, Italy People in different countries and periods of history have designed buildings in different styles. This may depend on the climate, the materials available for building, and fashion. The earliest architecture was the building of simple shelters, huts, and houses.

As people first began to live together in towns and cities, the types of architecture became more complex. Some of the oldest buildings that have been found include the pyramids in Egypt and the ziggurats in Mesopotamia, and other early temples. The houses common people lived in were fairly simple, small and close together.

The architecture of the Ancient Greeks and Romans is called Classical architecture. Some important classical buildings have stone columns with complex designs. Greek columns have beams placed across them, but Romans developed the arch in their architecture which was spread across the Roman Empire.

Indian architecture is famous for the stone carving of its temples and palaces. Different architectural styles developed in China, Japan, Southeast Asia, Africa, Mexico, and Central and South America. People in Western Europe in the Middle Ages made Romanesque architecture, then Gothic architecture. Gothic buildings have tall, pointed windows and arches. Many churches have Gothic architecture. When the Normans invaded England it was noticed that the English liked small houses with a lot of things in them, while the French liked big houses that were almost empty of furniture. Many castles were also built at this time. In Eastern Europe, the Byzantine influence meant that churches usually have domes.

Mosques may also have domes which are a way of building a wide open space that can hold a lot of people. This is important for religious buildings. 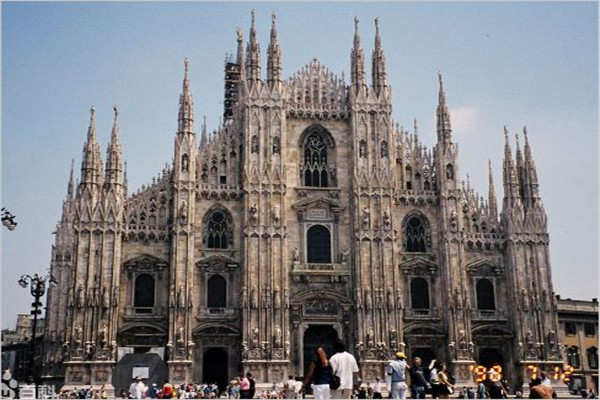 The Industrial Revolution led to new types for buildings for machines and for people to work in. Industrial architecture is the architecture of factories, mills, and other working buildings. Modern architecture was a new type of architecture created in about 1900. Modern buildings often have little decoration (designs to make something more beautiful) and are often made of steel, glass, and concrete.